During Clarion Write-a-thon Marie Vibbert puts the rest of the Clarion fundraisers to shame.  I’ve watched her do Write-a-thon several years running now and I think I know her secret:

I don’t think Marie would bury the lead like I’m doing here.  So… rather than post how I’m fixing my fundraising for Clarion at the bottom of a long and boring post I will leave you hanging.  Want to know what I’m going to do to up my fundraising game?  Stay tuned.  Or, get a jump on the rush and donate to my Write-a-thon. 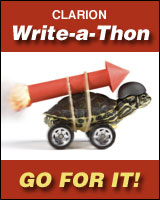 Has it been a year already?  It feels like the last Write-a-thon ended just yesterday.  Based on the number of posts I’ve managed on my blog it’s only been 6 weeks.

Nope, it’s time again.  It’s an especially weird year.  I’ve been to more conventions I’ve ever attended in a single year in just two months thanks to virtualization. I will get to attend Clarion classes without ever having been admitted (And the poor folks who were up this year? Their workshop has been put on hold).  Public and private education institutions are bleeding money.  Unemployment is at a record high (even the new and better recent unemployment numbers are still record-breaking).  Parts of our cities have been literally on fire.  People are dying.

You know that person who is writing a novel, learning three languages, training for a marathon, and learning to knit?  I’m not one of those.  I’m the person in the family who thinks about how we get our groceries with the least risk (and tries not to kill family members when they forget that we aren’t just popping out to the store for something they forgot).  I am she who reminds family members to not touch their masks and, for god sake, get your fingers out of your nose!  I am the one checking the new-cases count, daily, and assessing how safe the world is right now; trying to keep everyone healthy, not just her own family, but everyone–even the people who go out without masks.

I’m not getting much of anything done, let alone writing. I currently write by appointment.  I get the words in when someone is waiting on the other end of the zoom call for a write-in, but I can’t manage it for myself.

Here is my ask.  Give me something I have to live up to.  Make a donation to Clarion for my write-a-thon.  Make it so I have to sit down and write an average of a 1000 words a day.  It doesn’t matter if its a dollar or a hundred dollars.  Either will guilt me into showing up.  Be my appointment and help other writers step up their work in the process.

Rosencrantz and Guildenstern Are Dead