I volunteered to be on a panel for NaNoWriMo at my local writing center (plug for the amazing, free, resource that is the Cuyahoga County Public Library’s William N. Skirball Writers’ Center). 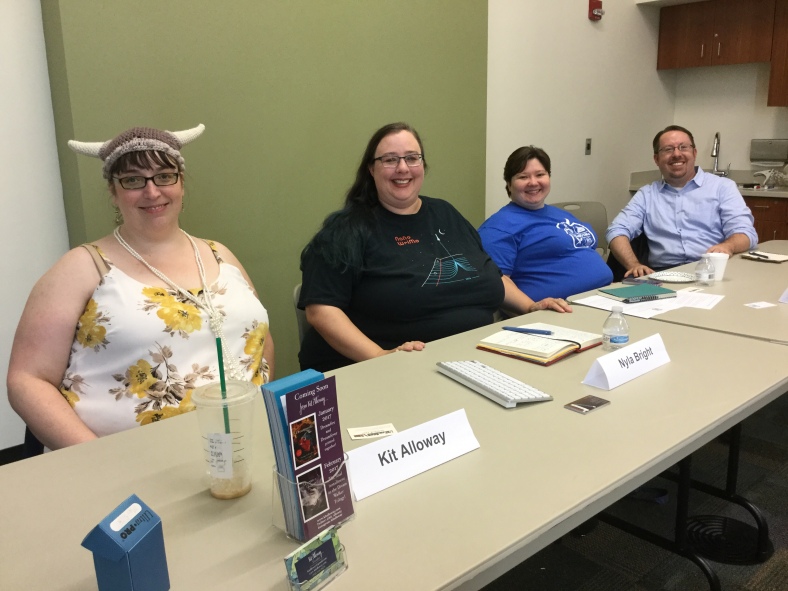 I’ve heard several authors I respect talk about how important it is to give back to the writing community by volunteering. Most of those talking about generously giving time are healthy men. I’ve learned to be skeptical of men giving career advice which often works for men but women are punished for following. Men are often viewed as assertive doing the same thing where women are deemed demanding and sharp elbowed. Women are often told they talk too much, even when, as one study showed, they talked less than the men. Women get a constant call on their time, so much so, we often don’t even register the bulk of the service and care work we do.

I also have chronic pain which means sometimes I need to carefully manage my energy resources. Last, by force of how I was raised and the culture I was raised in, I’m horribly bad at the word “no.” I don’t use it when I should. When I do use it and my objection is ignored, I generally surrender without a fuss and stew silently. If you’ve seen me stridently resist demands, you have no idea the mountain I kept my mouth shut about. This means I’m often doing things for others that isn’t in my own personal interest.

Despite my skepticism of the mantra of improving your writing career through service, I was honored the library Writing Center Specialist thought of me. And, I said yes without hesitation or thought. And I don’t regret it. It was a sunny Saturday morning. The audience was small, just those willing to be out of the house at 10 AM, up to facing the horror that is a sunny October day, and committed enough to try to write a novel in a month. The vast majority of the audience was new to NaNoWriMo so our advice, which was mostly obvious to anyone who had done NaNo at least once, was meaningful and well received. Questions were asked, ever the sign you didn’t put your audience into a hypnotic trance.

And the benefit for me beyond getting my ego stroked? I made two new professional contacts and I walked out of the room with two new short story ideas. My gift of time and experience instantly gave back. So, I’m going to try to pocket my belief that the world is out to eat me alive and try to say yes to public speaking opportunities more often, maybe, even — gasp — seek them out.