If you wander into my basement, you will find a very ugly built-in shelf that houses books we have read and books we are unlikely to read.  Unlike the teetering piles of books on top of my dresser, stacks under the nightstands of my husband’s and my bedside, the books tumbling off shelves in the kid’s room, and the books tucked into baskets on toilet tanks and in nooks by the sofa, the basement books are abandoned. 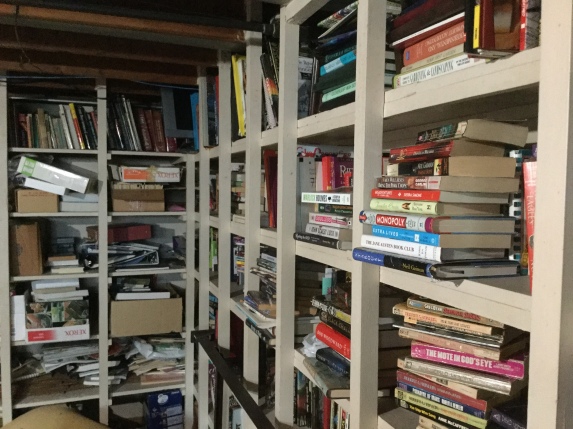 The unread books on these shelves are multitudes.  If they would pull together for form a being to seek revenge on our neglect they would call themselves Legion (largely due to the collection of various religious texts).

Among the unread books are sequels that we just couldn’t stomach after having read the first book.  I’m looking at you Fifty Shades Darker and award-winning literary books that we know we should want to read but could never bring ourselves to muster the energy for.  There are the books abandoned halfway through for being too stupid.  There are the books abandoned halfway through for being too good and triggering a swivet about the fate of a character.  (Sorry, Poisonwood Bible, as a mother I just couldn’t keep reading past the death you had spent the entire first half of the book telling me was coming.)  There are the books given earnestly from family members convinced that this diet or that would fix a body that has spent a lifetime failing me.

The largest collection by far, though, are the books I bought because I thought I would accomplish something.  The books on gardening, square foot gardening, container gardening, and even growing herbs on a micro-scale in my kitchen.  All were purchased in a conviction that I could garden as my father does. He is an old farm boy from Nebraska, who moved to California, got a subsidized college education, and didn’t stop until he had a Ph.D. and a comfortable tenure position.  You can take the boy off the farm and he will bring the farm with him to any suburban home he has.

But, no, buying the book, holding it my hands and wishing never made gardening something I would enjoy.  And enjoy it you must, given the output.  Even if you get a lot of vegetables and fruits, then you have more work in canning. So the books compost on the shelf.

Closely related are the home improvement and home organization books.  They boil 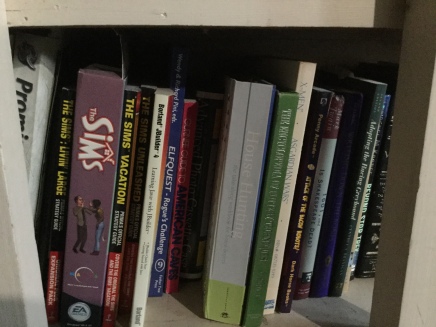 herculean tasks down to simple steps, glazing over the emotional work in completing projects.  We have long learned that the best of all possible options are for me to be out of the house, preferably out of state, when any home improvement project will be undertaken. I am ill-equipped emotionally for the disasters and messes of project middles. I am an attention-to-detail person with unwilling workers who would rather get the job done fast. It’s always better to not see the grinding of the entrails and the stuffing of the casing and just enjoy the sausage of a fait accompli.

As for the home organization books?  A personal zeal for organizing evaporates quickly when you realize your housemates aren’t going to part with any of their things. It took until my son was nearly 15 for him to finally agree that he might be too old for some of his toddler toys and that the fast-food kid’s meal toys were of no value even to Goodwill.  Someday, when we move, there will be a great dumpster rolled into our driveway and I will shovel all their crap forth (and more than a little of my own crap).  But, that is unlikely to happen anywhere in the next 5 years baring a BRAC (military realignment and base closings).

There are books on dealing with Fibromyalgia and Chronic Pain that languish unread once I realized they were pushing food exclusion diets with little real scientific proof. Having been a larger person my whole life (heaviest girl at any synchronized swim meet, let alone my team) nothing sets of my alarm bells like people making expansive promises from a diet change. The fastest way to get me to question your expertise is to make dietary claims without supporting studies.  The surest way to get me to drop a book like a hot potato is the old “8 glasses of water” chestnut.

In case you didn’t know, you don’t need 8 glasses of water a day, there has never been any evidence for it.  Studies that have looked at dehydration have found that most people do get enough liquids.  Drink when you are thirsty.  Limit high salt drinks.  If your pee is brown or tan, you need to drink more.  If you get kidney stones, drink a lot.  In other words, if I know more about nutrition than the person writing the book, it gets banished to the basement shelves.

Books have been highlighting my inability to get things done since I was a child.  I think I was maybe 12 when I bought a book on how to build a fort in my back yard.  I read that one from cover to cover.  I paced out where I would place the fort.  I wrote out a supply list. If any adult in my life had been interested, or even aware of what I was doing, that might have been the start of an amazing family project.  My father had carpentry skills and we certainly had the money.  Instead, I made plans and it went nowhere because I was 12, and buying 2x4s and getting them home was not even in the realm of possibility.  I suppose it is all for the best.  I still have 10 fingers.

When I was 14, my father told me earnestly that he knew it was natural for kids to want to experiment with drugs, and if I wanted to do illegal drugs to let him know.  He knew people who could get safe drugs and tell me how to use them.  And most importantly, he wanted me to use them at home.  This emphasis on safety was not at all characteristic for my father.  I was allowed to roam free in our college town, unsupervised.  After a few scares, I was required to leave a note to where I was going, but it was rarely where I ended up.  I spend endless hours alone on my bike or the public buses that crisscrossed the town.  I don’t think the lecture had the effect my father had hoped for.  Since illegal drugs were so dangerous that my father, who considered any day a child didn’t lose an arm in a thresher a parenting success story, was concerned with safety, illegal drugs were not for me.  Instead, I went out and found a book on “legal” drugs.  On the inside cover, where the dedication usually is found was the line ” Everything not forbidden is compulsory,” attributed to Merlin instead of T. H. White.  I read that book cover to cover and believed every word.  It was a surprisingly honest book about side effects.  Perhaps too honest.  It was all well and good, as I suspect many of the uses touted as legal might have already been illegal in Ohio. I had no urge to spend a night high and peeing my brains out on a toilet.  I certainly wanted to avoid things that would make me vomit.  That narrowed the choices down to zero.

The last category on the shelves downstairs is the one I’m most ashamed of.  Unread books on the craft of writing.  A few of these fall into the category of random gifts from family members who don’t know there is a difference between fiction and nonfiction writing, between contemporary and genre fiction writing, and between novels and short stories.  Most were bought like those home organization books as if owning the book would somehow magically erase the very real barriers to why I hadn’t already become a more successful writer.  A good number that I abandoned halfway through were like the books on pain management that touted information as a proven fact that was dated or just never true.  Even more landed like the home improvement books, making the steps to becoming a great writer sound simple, but ignoring the emotional work and skill-building necessary to get the results they were offering.  And last are the books that I’ve read cover to cover and never implemented for lack of resources or just fear.

The basement has been for several years now an all guy zone.  The few times I’ve ventured down it has smelled like it, too. If you are ever in my house, and are willing to wade into the male abyss, you can enter the catacombs of where the dead bodies of books are laid out to wait for either a resurrection or the day the dumpster is parked in my driveway. Feel free to take a few if they interest you.  I won’t miss them.